What you think you know about nuclear waste

In the entire world, the energy produced by the nuclear industry represents 10% of the world’s electricity. In comparison, Coal represents 38% and Gas 23%. France, provides a bit more than 70% of the country’s energy through its 58 reactors and Belgium, with its 7 plants, 40% in 20191. This intense use of nuclear technology produces radioactive wastes. These wastes are dangerous for the human being due to their gamma ray's emission. This high frequency rays are2 able to affect our DNA and cells, creating cancers. Are nuclear waste such a great danger to people? Do we all know the whys and wherefores of the specific radioactive waste's management? Let’s clarify it!

Common belief #1: Nuclear wastes are produced only by our nuclear plants.

False! Nuclear wastes are all the material, whose were radio-activated by humans' activities, mainly the nuclear fuel, after its use in a nuclear reactor3... but not only! Indeed, nuclear technology is also used in medicine applications4, research institutes and organisations, military use and propulsion means.
In the medicine industry, radioactive isotopes are injected into the bloodstream and used as tracers for imaging or to annihilate metastases after a liver cancer5 for example.
Nuclear wastes are also a consequence of research Reactors, such as new fission technologies (sodium-cooled fast reactors, 40 MW small Russian Reactors) or new fusion experiments (in the European ITER-Project or Asian EAST-Project, both aiming to create energy from the fusion technology).
The military sector produces some nuclear wastes by using and processing radioactive elements in order to assure the defence, to propels and power submarines for example.
This nuclear propels mean is used in the civil sector in the large Russian icebreakers6 too.
The graph below describes in France (2018), the repartition of nuclear waste’s sources7. 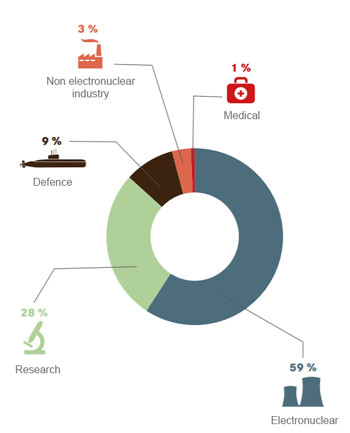 False! The radiotoxicity of a waste depends on the intensity of the radiation and of the duration of the exposure. Indeed, a more concentrated-time exposition poses a greater risk than the dilute-time one8.
Moreover, a dose comparison910 could be more relevant (Unit used: the sievert ) to derive a quantity called equivalent dose, related to the absorbed dose in human tissue to the effective biological damage of the radiation:

Common belief #3: For more than 50 years, we have been using this type of energy production. There could be a huge amount of nuclear waste!

False! The total amount of all nuclear wastes from the nuclear industry is around 1000 m3 in France11, 2000 m3 per year in the US12 for example. It means that each year, for the France and its 58 reactors, the volume of high-level radioactive wastes could be contained in one third of an Olympic swimming pool13 for France. In the US, the whole production over this past 50 years represents an amount of waste covering a football field to a depth of less than 9 meters.
It’s also good to know that 95% of all nuclear radioactivity is contained in 0,3% of the volume of all nuclear wastes.
By the way, for an equivalent energy production, 1 kg of Uranium is equal to 2 tons of Coal.

Common belief #4: It exists no way to get rid of the nuclear wastes definitively

False! Some countries found some solutions. Firstly, some bad solution, such as dropping nuclear wastes in the Ocean. It was the case in the Atlantic Ocean from France, who sank between 1967 and 1969 around 14 000 Tons14 of nuclear wastes. Some other ideas were to throw these bulky wastes in a volcano or to send them in space, away from our beloved earth. These solutions were left because of their bad results arising from environmental and costs consequences.
What about the solution of waiting? It’s important to notice that the radioactivity of a radioactive isotope decreases along a decreasing exponential curve. So, we just must wait until the radioactivity of the waste decrease below the natural radioactivity of natural uranium! It sounds good if we don’t consider the half-life of this isotope (the radioactive half-life for a given radioisotope is the time for half the radioactive nuclei in any sample to undergo radioactive decay15). For the plutonium 239 contained in used fuel, it decays with a half-life of 24 100 years16. Some isotopes will be dangerous for human being for too long in our human timescale.
But a safe and durable enough solution was adopted by several countries such as Finland, France or the United States. This solution is the deep geological repositories. The idea is simple and still under experimentation: store the nuclear waste in a deep (400-600 meters deep) old (millions of years) geological strata. This stratum must prevent and slow the propagation of radioactive isotope to assure safety on the very long term (tens of thousands of years). Serious advances in France17, Finland and USA were made in the last years. Public opinion has proven to be the main cause of the project's slowdown.

Not True! It exists a way to reuse used fuel from the nuclear plants. This recycled fuel is called MOX (for mixed-oxide fuel, which is a mixture of uranium and plutonium oxide18).
This valuable resource is used in fast neutron reactors to produce electricity as well as the common uranium fuel. This recycling process is done by Orano in La Hague in France. It stays however an incomplete and expensive solution19: indeed, after the use of MOx fuel, they need to be cooled for a longer period of time20.

As a conclusion, this article shows the importance of critical thinking and source verification. Of course, the nuclear energy is much talked about but it is far from being the most dangerous source of energy, because industrials now manage risks efficiently.
The increase of energy needs, of nuclear plants under construction and the just emerging green alternatives leads our society to more nuclear wastes in the next decades. The fusion technology could have been a very interesting solution, but the research and advances will be still in progress for at least 30 years.